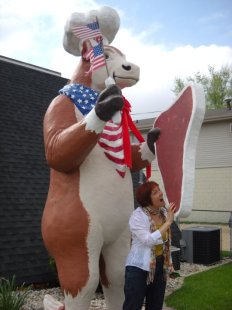 Sue and I had enjoyed an impromptu road trip to find a kinda famous “dented goods” place run by Mennonites in the middle of “I’m Lost” Wisconsin. Because of getting lost, we got there a half hour before closing, and discovered that we didn’t need more time than that. My primary purchases were corn remover pads in every configuration. It’s been 5 years and I still have stock, but what a deal!

We found roadside attractions to take turns posing beside. I felt like a true American standing beside the big ass upright cow statue that was wearing a chef’s hat and holding a big raw slab of sirloin.

Our last “official” destination before heading back to Illinois was established: Baumgartner’s in Monroe. It is one of a kind, so far as I can tell. The walls are covered by a battle between wine and beer, which I understand is symbolic of a battle between the Huguenots and the Catholics. In Monroe, the beery Protestants win.

Note that the beer steins are loading catapults with limburger while wearing clothespins on their noses.

Years earlier in our friendship, when Sue lived upstairs from me, we had gotten drawn to Monroe by their rotating festivals—one year it was the cheese festival and the next an accordion festival. Fortunately a girl never had to choose between them.

We’d almost come to blows during the Cheese Festival parade that honored families of cheese makers—seriously there were flatbed trucks with a bunch of old German farmers sitting on chairs. It was cute and funny, but the people of Monroe are serious about their cheese. They set up chairs days in advance, we later learned, to watch the parade. When I stepped out to take a couple of pictures, a wave of seething hatred washed over me from behind. Soon the grumbling began and we moved along, hoping not to have drawn the short straw in Shirley Jackson’s “The Lottery” re-make.

On this day in Monroe, we were bound to try a local cheese of lore: limburger! We knew of its stinky reputation, but we’re fans of stinky cheese! Until our sandwiches arrived, we didn’t know that limburger actually smells like roadkill that has been in the sun for several days. We laughed and cried and cried. 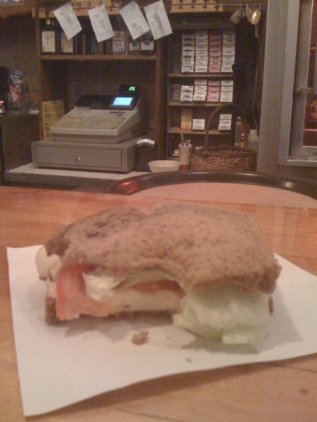 I don’t think I was able to eat more than this. I can still smell this sandwich.