Commencement really is a transitional moment, isn’t it? The old ceremony is designed to recognize educational and personal accomplishments, to give a hearty nod to the village that made it possible through various forms of support. I can be relied upon to shed a few tears–I blame my contact lenses–before the tedium takes over. Like many in the audience and sitting in the graduate chairs, I find Commencement to be a moving ceremony.

Holy Names University was fortunate to have Gwen Ifill as a Commencement speaker this year. I have long admired her skill, poise, and intelligence as a journalist and news anchor. Having such a recognized and respected person as a speaker was a coup for the little, often-overlooked university in the hills. The surprise, for me, was what a wonderful match she was for the university and its graduates. In retrospect, of course she was.

HNU is a pretty diverse place. (Actually, it’s the most diverse university of its size on the west coast.)  The students are frequently the first of their families to graduate from college. Although the values and faith of the church are the bedrock of this institution, it’s not a preachy place. There’s room under the university’s umbrella for a lot of us, wherever we may be on the faith continuum. 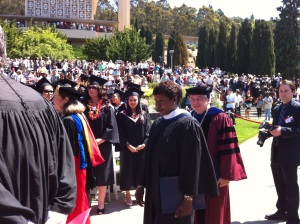 This year was interesting. Perhaps because the university’s new-ish President Hynes has found his legs and was able to really shape and participate in the ceremony, and, indeed, he is responsible for convincing Ms. Ifill she could fit HNU into her busy schedule. (Honestly, I think he wore her down, but she was a good sport about it!)

Ms. Ifill reached her audience. The child of a minister, her values rest on bedrock similar to the university’s values. Many of the graduating students also grew up in a church community. Although her talk did not focus on scripture, she acknowledged the values that send HNU students into the world in service to their community (building houses in Mississippi and protesting at the School of the Americas, for example).

Commencement became a little like church, with an occasional “Amen”, or a respectful shout out; the participation was organic and supportive and celebratory. It felt good! Even more gratifying, Gwen Ifill looked like she enjoyed being there. (And considering the parade of shoes those gals were wearing to march down a hundred stairs and teeter across the dais in, what woman wouldn’t enjoy the show?)

Isn’t that what makes some of life’s best moments–when you are able to do just the right thing for the right person or group of people. In that moment, the relationship can be transformed, as I think it was that day. Ms. Ifill received something I don’t think she expected–she clicked into this place with these people. The recipients, the graduates, may have given more than they knew.

Before Commencement day, it looked possible that Michael & I would drive Gwenn Ifill to the airport after she spoke. I shrieked, “We can’t do it! We have karma!” I was remembering the 2003 Commencement at Rockford College, which was a real riot. And by “riot,” I don’t mean a rollicking good time.

I could say a lot about that year’s speaker Chris Hedges, also a minister’s son. (Michael and I picked him up at the airport the night before & I drove the getaway car to get him away from the college after the …er…I mean, after the audience reacted negatively to his thought-provoking speech.) I could I say a lot about that commencement, but most importantly, I felt like this year’s ceremony represented the pendulum’s swing back to karmic rectitude in some odd way.

For the purpose of this post, I will say what a gift it was to listen to a speaker who comes from a solid place, whose intention is to challenge, but also to engage and recognize the achievements of others. It’s a life lesson and a nice gift to send with graduates, as they go to find their next opportunity.

Have you been to a particularly memorable Commencement? Tell me about it!

If you are interested in the Rockford College Commencement, google “rockford college chris hedges” for a video of the attempted speech. The most thoughtful account of the incident was written up in the Chicago Reader: http://www.chicagoreader.com/chicago/war-comes-to-rockfordcartoonist-kerfufflecartoon-recount/Content?oid=912271)